Written by Shamir Allibhai
Updated over a week ago

You may want to consider turning off transcoding with video as transcoding and uploading will be faster.

There are two ways to turn off or on video proxies:

Open the Simon Says mac app from the Applications folder and from the File menu, select "Import with video".

Alternatively and because FCP extensions don't have their own menu, you can click the + icon on the import screen three times. You will see a film emoji appear or disappear if you did it correctly. 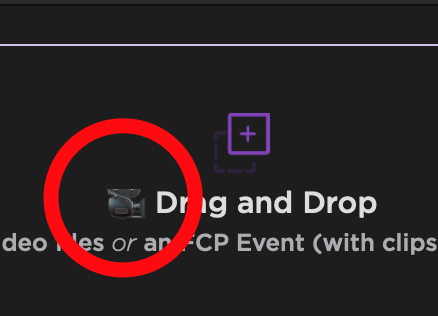 When you see the film emoji, audio and video proxies are on.

When you don't see it, only audio proxies will transcode and upload.

Best Practices for importing Multicam and Sync clips with the SS FCP X Extension
Can I translate my subtitles within the FCP Extension?
Export burnt-in subtitles/caption in FCPX
Exporting video proxies from your NLE to preserve timecode/framerate through to transcript export
Features of the Simon Says Mac app (a visual guide)
How can I use the transcript editor?
Visual Subtitle Editor